And so our chicken coop adventure began…

We began our adventure with chickens in 2011.  We started with 3 bantam chicks, but within a week, we added three more.  As they grew bigger in the poultry brooder, I built our first chicken coop. 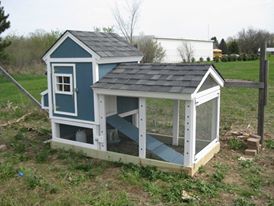 The six bantam birds were about right for our first chicken coop (pictured at the right), but as the kids gained interest in showing chickens at the local 4-H fair, we expanded our flock again.   To accommodate the larger population, the “Chick Inn” was planned and built.

Construction began in 2013.  It took the better part of the summer to build the “Chick Inn” but it was well worth it.  The increased space allowed for storage for food and other supplies.  Visit the picture page to see the construction photos.  I used a basic 10 x 12 shed plan and modified it with a porch and an inside partition to allow for storage and egg boxes.  The coop matches our house.  We also decorate it with lights and wreaths for Christmas to match as well.  My wife has also made chicken themed curtain headings for the front window and door window.

There are now fourteen chickens of various breed living at the Inn.  We’ve had as many as 21 birds.  You can view live still shots at the chickencam page link above.  I’m planning on adding some additional pages about the individual chickens to the site at a later time, so check back again!

Thank you for your interest,